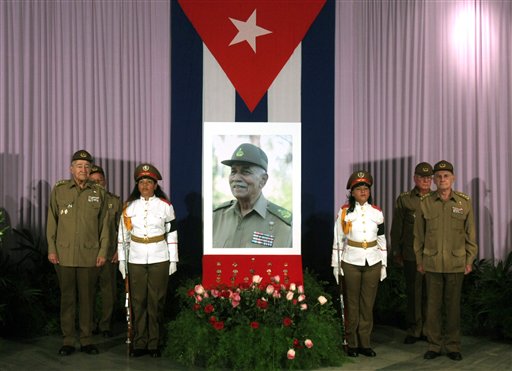 Tens of thousands of Cubans lined up Sunday to pay their respects to Juan Almeida Bosque, a vice president and hero of the country’s 1959 revolution whose death at the age of 82 further thinned the ranks of this communist-run country’s old-guard leaders, the Associated Press reports. President Raul Castro led the ceremony at Havana’s Revolution Square, somberly placing a pink rose in front of a large photograph of Almeida. Flags flew at half-staff throughout the country. Fidel Castro, who did not attend, released a statement saying that “I didn’t know, neither did any of us, just how much pain news of his passing would bring. I was a privileged witness of his exemplary conduct during more than half a century of heroic and victorious resistance.”

Lines of thousands formed early and snaked through Revolution Square on Sunday. Some bowed before Almeida’s photograph, while military men and veterans saluted. Many more Cubans were expected to attend smaller memorials throughout the country. Almeida, one of just three surviving rebel leaders who still bore the title “Commander of the Revolution,” died Friday of a heart attack. He was the first of Cuba’s revolutionary giants to pass away since Raul Castro’s wife, Vilma Espín, died in June 2007, and his death was a sudden if not unexpected reminder that all of the country’s aging leaders are facing the inevitable march of time. Most are in their late 70s and early 80s, including the Castro brothers, and it is not at all clear who would replace them. The few young leaders who have emerged over the years have not lasted long before falling out of favor. Almeida was a member of Cuba’s ruling elite, sitting on the Communist Party’s politburo and serving as a vice president on the Council of State, the country’s supreme governing body. He cut back on activities in December 2003, citing heart problems.

Almeida met Fidel Castro in 1952 at the University of Havana, where both were studying law, and he had been at Castro’s side ever since, through his imprisonment on the Isla de la Juventud, exile in Mexico and return to Cuba aboard the American yacht “Granma” in 1956 to launch the revolution. Almeida, the Castro brothers and Argentine-born Ernesto “Che” Guevara were among only 16 rebels who survived the landing, in which most of the rebels were killed by government troops. “Aquí no se rinde nadie! (No one here gives up!) Almeida shouted to Guevara at the time, giving the Cuban revolution one of its most lasting slogans and ensuring his place in Cuban communist history. As a guerrilla leader, Almeida later headed his own front of military operations in eastern Cuba.

For the original report go to http://www.google.com/hostednews/ap/article/ALeqM5j2TJuGZwEnfF6zCtHtOdpNiodY9wD9AMNOG81

Photo: Cuba’s Gen. Defense Minister Julio Casas Regueiro, right, and Cuba’s Interior Minister Abelardo Colome Ibarra, left, take part in a honor guard next to an image of Cuba’s Commander of the Revolution Juan Almeida Bosque, center, during a funeral ceremony in Havana, Sunday, Sept. 13, 2009. Almeida Bosque, 82, a comrade-in-arms of Fidel Castro since the start of his guerrilla struggle more than a half-century ago, died of a heart attack on Friday Sept. 11, 2009, Cuba’s government said. (AP Photo/Prensa Latina, Ismael Francisco)

One thought on “Cuban revolutionary hero buried in eastern Cuba”