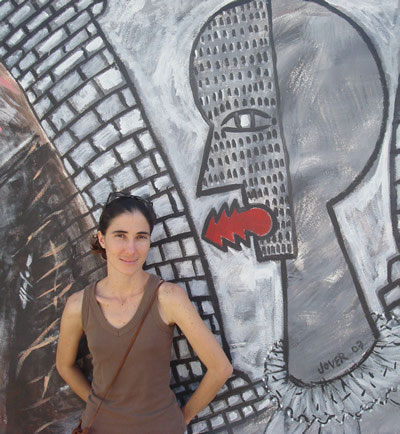 Cuban blogger Yoani Sánchez is one of the recipients of the 2009 Heroes of the Hemisphere awared, it was announced yesterday. The awards, sponsored by the Pan American Development Foundation, are given to people who had demonstrated a dedication to improving the lives of people in their communities. In announcing the awards the PADF had this to say about Sanches’s selection: “Writing a blog may seem common today – unless you live in Cuba. That did not stop Yoani Sanchez, a 33-year-old Cuban who writes an independent blog called Generacion Y that chronicles everyday life in Cuba. The government has blocked her blog on the island. Once her observations are posted, she cannot see her words online. Yoani is also teaching other Cubans how to write and publish blogs – regardless of whether they will actually see their final words online.” The four others selected for the recognition include Nicole Muller Cesar (Tabarre, Haiti), Andrea González (Bogotá, Colombia), Jose Silvestre Sánchez (Cáceres, Colombia), and Juan Ayala (Santa Marta, EL Salvador).

PADF, which created the Heroes of the Hemisphere to celebrate the achievements of people in Latin America and the Caribbean, will honor the five during a gala luncheon and celebration in Miami on Saturday, Oct. 24. This hemispheric gathering will unite 350 leaders from business, government, diplomacy, philanthropy and entertainment. President Rene Préval of Haiti has confirmed his attendance. “When their neighbors were confronted with tremendous obstacles and circumstances, these individuals stepped in and made a significant difference,” says Amy Coughenour, Deputy Executive Director of PADF. “These five honorees truly deserve to be called Heroes of the Hemisphere.”

Nicole Muller Cesar was cited for her work with children in Haiti: “In the poorest country in the hemisphere, the youngest are often the first to be abused and the last to get help. After a successful, 30-year career in Boston, Nicole Muller Cesar returned to her native Haiti 10 years ago to assist children who are the victims of violence, exploitation, sexual abuse and abandonment. Nicole started a school in an impoverished neighborhood of Tabarre to provide holistic support for children – including basic education, medical, dental, counseling, weekly home visits and for most students their only meal of the day. Today, the Institute for Human and Community Development assists and educates 250 children ages 6 to 16 six days a week.

Andrea González helps internal refugees in Colombia to become entrepreneurs and overcome their circumstances. José Silvestre Sánchez has organized a cooperative farm for 38 Afro-Colombian families and created a distribution network for their harvest. Juan Ayala, after spending 7 years in a refugee camp when his community was destroyed by paramilitary forces, rebuilt his school at the age of sixteen and since then has provided K-12 education to more than 600 children.

For more go to www.HeroesoftheHemisphere.org

One thought on “PADF Award to Cuban blogger Yoani Sánchez”