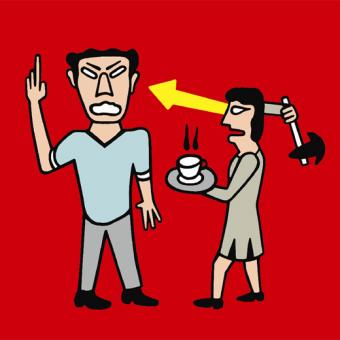 Cuban writer Leonardo Padura has just published a short story in El País, an amusing tale about a wife who has waited 18 years to avenge a life of abuse from her husband. It is a hilarious illustration of the saying that “revenge is a dish best served cold . . .  Its title translates as “Diamond Wedding Anniversary” at it tells of a wife who had heard that according to the Penal Code citizens older than 80 were exempt from having to serve jail sentences no matter what the crime. She heard it at the age of 62, after 42 years of marriage, and awaits the very moment of turning 80 with an ax in her drawer. Plain hilarious.  Unfortunately, it is in Spanish, but if you read Spanish, enjoy! You can access it through the link below.

You can find the short story (in Spanish) at http://lacomunidad.cadenaser.com/desde-el-tropico-de-cancer/2009/8/9/tinto-verano-bodas-diamante-leonardo-padura

Image: drawing by César Fernández-Arias as an original illustration for the short story.