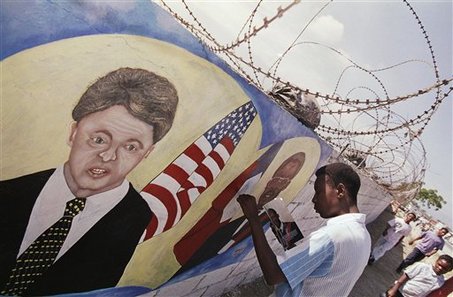 Former U.S. President Bill Clinton said on Sunday he would lead an international trade mission of private investors to Haiti in October to pursue energy and other development amid signs the nation is stabilizing. In his first major address to the Haitian diaspora since becoming U.N. special envoy to Haiti, Clinton said stability had improved in the troubled Caribbean nation, providing new opportunity for foreign investment. “I think we are really on the verge of being able to make some significant changes,” Clinton said.
Deeply impoverished Haiti was plagued by coups and sporadic unrest for much of the 1980s and 1990s. U.N. peacekeeping forces have been helping maintain order in the Caribbean nation since the last revolt in 2004. But United States, Canada and other nations have recently eased their travel warnings for Haiti in recognition of improving security, while the Haitian government has streamlined the approval process for business ventures, Clinton said. The World Bank and International Monetary Fund granted Haiti $1.2 billion of debt relief in June, helping ease its financial burden.
Clinton said his investor mission would focus on agriculture, construction, textiles and energy, citing examples that ranged from increasing Haiti’s mango exports to developing affordable fuel. Electric power is scarce in rural areas and the cutting of trees to make charcoal has led to deforestation in Haiti. As an example of projects rife for further investment, Clinton described a recycling program that turns paper and sawdust waste into cooking fuel that sells for one-fifth the cost of charcoal. Clinton also said Brazilian investors who he did not identify had expressed interest in expanding sugarcane-to-ethanol production to new areas outside Brazil, and that it was “a real possibility” for Haiti.

Originally reported by Reuters at http://www.reuters.com/article/latestCrisis/idUSN89321137

Image: Michelet Anantua, of Port-au-Prince, puts the finishing touches on a mural that reads “This is to prove we love Bill Clinton” in this 1994 welcoming. Originally published at http://www.cleveland.com/world/index.ssf/2009/05/18/