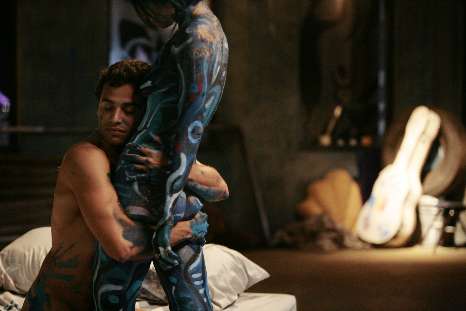 Miente (Lie) is the name of a new Puerto Rican feature film directed and designed by Rafi Mercado from House of Mercado Entertainment. Starring Oscar Guerrero as Henry, Mariana Santángelo as Paula, and Frank Perozo as Diff, the film is based on the novel “Different” by Javier Avila. It is a production of Frances Lausell and Sonia Fritz for Isla Films. The film will open in October.

Miente follows the story of Henry, an introverted young artist who, seeking to escape the banality and violence of urban life, begins to blur the distinction between fantasy and reality. It is “a Latino psychological thriller with a unique visual style.”

“It is a psychological thriller that will surprise viewers. I am sure it will give people something to talk about, both because of its visual quality as because of its plot twists. It is a daring film because it explores new themes and is a film nurtured by sensuality,” explained producer Frances Lausell, who expects the film to be in theaters in October.  “Henry strides the line between sanity and insanity, and in moments of despair, walks a tightrope between the two. The film has very high production values, with a soundtrack that includes Spanish-language rock bands and a very talented cast,” Lausell, co-founder of Isla Films, explained, underscoring the importance of continuity in the island’s film industry, so as to accustom movie viewers to see local film productions. Lausell is conscious that the Puerto Rican movie viewer is anesthesized by Hollywood films, but trusts nonetheless that the high quality of local film productions, especially since 2007, will help people develop a taste for island films.

“We have to bring audiences a great film. We don’t want them to support us for the sake of supporting us. We want them to leave the theater seduced, conquered by the story we tell them.” The producers intend to bring the film to the international film festival circuit.

For more (in Spanish) go to http://www.primerahora.com/diario/noticia/cine/espectaculos_asi/lo_proximo_en_el_cine_boricua/315447