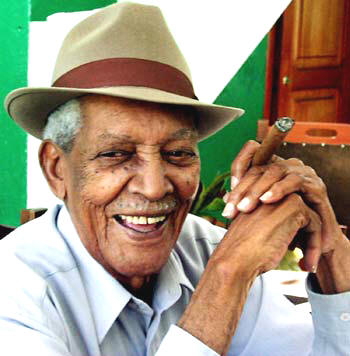 A versatile musician, he began his career as a clarinet player with the Miguel Matamoros band. In 1948 he was part of the duo Los Compadres with his friend Lorenzo Hierrezuelo. Soon after, he formed his own band, which he named Compay Segundo y Sus Muchachos.

The revitalization of his career began in 1989 when musicologist Danilo Orozco invited him to the Smithsonian Institute in Washington to play with other musicians. His collaborations with Santiago Auserón and Chano Lobato also earned him a degree of celebrity in Europe. But it was not until 1998 that he gained world recognition with his participation with Roy Cooder and outstanding fellow Cuban artists in the project Buena Vista Social Club. Compay Segundo was 90 years old. He continued performing actively until his death at the age of 95.

For full description (in Spanish) and photo, see http://www.avizora.com/publicaciones/biografias/textos/compay_segundo_0014.htm