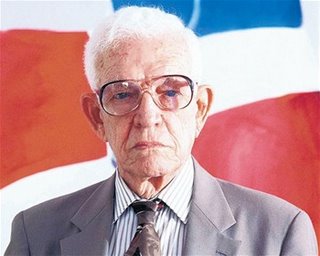 Today marks the 100th anniversary of the birth of Juan Bosch (June 30, 1909-November 1, 2001), leading Caribbean intellectual and former president of the Dominican Republic. He was a politician, historian, writer, and educator. Before his brief presidency in 1963, he led Dominican opposition in exile to Rafael Trujillo’s long dictatorship. He was exiled for twenty-three years.

Bosch is remembered as an honest politician, an outstanding historian, and one of the most prominent writers in Dominican literature. He founded both the Dominican Revolutionary Party (PRD) in 1939 and the Dominican Liberation Party (PLD) in 1973. He published numerous essays and short stories, and was highly acclaimed for his historical study of the Caribbean, De Cristóbal Colón a Fidel Castro: el Caribe, frontera imperial [From Christopher Columbus to Fidel Castro: The Caribbean, Imperial Frontier].

The centennial has been celebrated with various events this year in many regions of the Dominican Republic. Because Bosch spent many years in Cuba as an educator and scholar, his legacy is much respected, and the island also hosted exhibitions, presentation of archival material, panels, lectures, roundtables, and films throughout 2009 [also see In Cuba, Program on Caribbean Social Thought: Bosch Centennial].

Photo of Juan Bosch from http://www.blog.cosasdelcibao.com/2008_07_01_archive.html