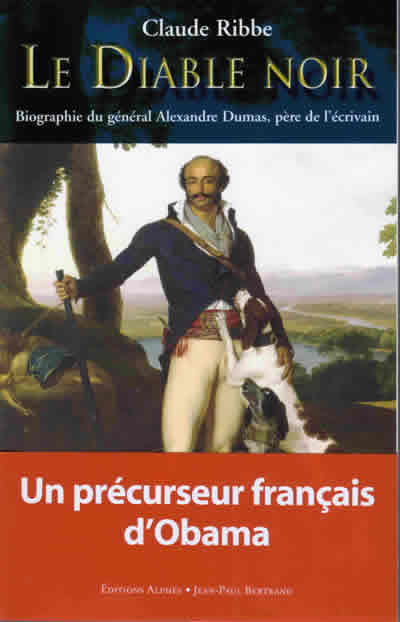 Le Diable noir: Biographie du général Dumas (Editions Alphée Jean-Paul Bertrand, 2008) is the biography of Thomas-Alexandre Dumas (father and grandfather of the celebrated writers, the two Alexandre Dumas), who was born a slave in Haiti (1762) and later became a general and hero of the French Revolution. His parents being a fugitive marquis from Normandy (Alexandre-Antoine Davy de la Pailleterie) and a black woman (Marie-Césette Dumas), “Dumas braved prejudices to lead his troops to victory in the Alps, the Pyrenees, Belgium, en Italy, Austria, and Egypt against the adversaries of the young Republic in the name of a still new idea: the rights of Man.” Having criticized the Egyptian campaign as a foolish enterprise under incompetent direction, he became the focus of Napoleon Bonaparte’s rage and was accused of sedition. General Dumas resigned, never again to serve in the French army.

In this biography, Claude Ribbe builds his arguments on previously unexplored archival documents, including the spectacular journal that Dumas wrote in captivity when he was imprisoned by Ferdinand, King of Naples and the Two Sicilies (then at war with France). The journal, transcribed in this volume, reveals the “mysteries of the ‘Black Devil’ [. . .], the true story of this American D’Artagnan, more breathtaking and novelesque than anything his son has recounted.”

Claude Ribbe was born in Paris, France (1954). His parents are from Guadeloupe and La Creuse. Trained in philosophy at the École Normale Supérieure in Paris, he worked in various ministerial capacities before dedicating himself fully to writing. Some of his other work includes Le Nègre vous emmerde. Pour Aimé Césaire (2008), Les Nègres de la République (2007), Le Crime de Napoléon (2005), and other texts related to General Alexandre Dumas. Ribbe’s Le Diable noir has been marketed with an added subtitle, referring to General Dumas as the “Obama’s French precursor.”