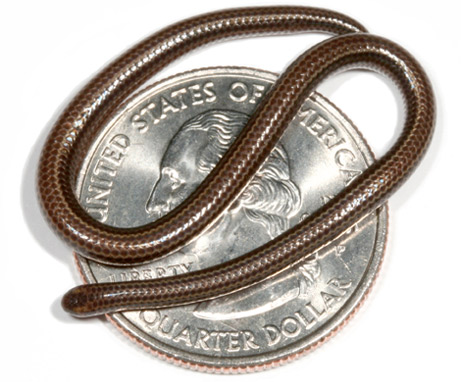 As they do every year, scientists from the International Institute for Species Exploration at the Arizona State University (ASU) and an international committee of taxonomists have just released their annual list of top 10 new species, selected from among the best of thousands of new species discovered in 2008. The Barbados thread snake (Leptotyphlops carlae), a soil-burrowing reptile about ten centimeters long (less than four inches), was among those selected for the top-ten list. The snake, considered to be the world’s smallest, was “discovered” in St. Joseph Parish, Barbados.

News of the “discovery” last year was treated with derision and anger in Barbados, where people are familiar with the tiny snake. Most of the anger was focused on the “discoverer,” biologist S. Blair Hedges, whose research teams also have discovered the world’s tiniest lizard in the Dominican Republic and the smallest frog in Cuba, and who named the new snake after his wife Carla. “If he needs to blow his own trumpet … well, fine,” said 43-year-old Barbadian Charles Atkins at the time. “But my mother, who was a simple housewife, she showed me the snake when I was a child.” Margaret Knight, writing in the Barbados Free Press blog questioned how someone could “discover” a snake long known to locals, who called it the thread snake. “How dare this man come in here and name a snake after his wife?” she asked.

Hedges told The Associated Press last August that he understood Barbadians’ angry reactions, but under established scientific practice, the first person to do a full description of a species is said to have discovered it and gives it a scientific name. He said most newly “discovered” species are already well known to locals, and the term refers to the work done in a laboratory to establish a genetic profile. I am sympathetic, being an academic myself, but for Caribbean people’s accustomed to constant colonial and post-colonial  appropriations, the “discovery” came across as another assault. He could have named it after the Parish where it was discovered, I suppose.

This year’s list of “new” species is dominated by tiny creatures, which may go some way to explain why they’ve gone undetected for so long. The smallest entry is a (ugh!) bacteria that lives in hairspray (Microbacterium hataononis); a tiny seahorse (Hippocampus satomiae) found off Derawan Island, Kalimantan, Indonesia, which measures just over a centimeter in height and length;  a stick-like creature (Phobaeticus chani) found in Borneo which can grow up to 56 centimeters long; the ghost slug (Selenochlamys ysbryda), which despite its bright white appearance and “blade-like teeth” has been evading the locals in Cardiff, Wales for years; a species of snail (Opisthostoma vermiculum) found in Malaysia whose shell twists around four axes; and the first recorded species of a caffeine-free coffee plant found in Central Africa (Coffea charrieriana).