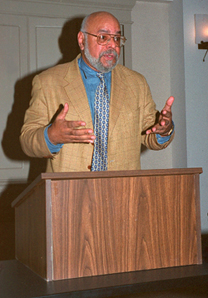 Puerto Rican scholar Roberto Márquez, the William R. Kenan, Jr. Professor of Latin American and Caribbean Studies at Mt. Holyoke College, received the distinction of Honorary Member of the Fundación Nicolás Guillén for his work on Cuba’s national poet.  In her remarks at the public ceremony of induction, Denia García Ronda declared that within the internationally extensive “Guillén community,” Roberto Márquez is part of the select group of that “nuclear family.” Summarizing his contributions as a translator, scholar, and critic of Guillén’s work, she concluded that “Roberto Márquez is, without any doubt, the person who has done the most to make Guillén’s poetry available in English– and not just in the United States.”  Recognized for the caliber of his many translations from the work of a wide variety of Latin American poets and writers and for his work in Caribbean literary and cultural history, Márquez is the editor of several volumes of the poetry of Nicolás Guillén, including My Last Name and Other Poems, The Great Zoo, Patria o Muerte: The Great Zoo and Other Poems, and, with D. A. McMurray, Man-Making Words: Selected Poems.

Márquez had been invited to Havana in February to serve as one of the judges for the 2009 Casa de Las Americas Literature Prize. Comprised of a highly distinguished group of writers, artists, critics, and scholars from all across the Americas, the jury for the annual prize deliberated more than 624 unpublished works submitted from 19 countries. Granting awards in various genres– novel, poetry, short story, drama, testimony, works for children and young adults– the fiftieth anniversary edition of one of Latin America’s oldest, most coveted, and prestigious literary prizes this year also included an Extraordinary Prize for Studies on Latinos in the United States, in either Spanish or English. The first winner of the award was the Puerto Rican scholar Juan Flores, professor of Africana, Puerto Rican, and Latino studies at Hunter College, for his Bugalú y otros guisos: ensayos sobre culturas latinas en Estados Unidos [Bugalu and Other Fusions: Essays on Latino Cultures in the United States] (see April 13th post, “New book/Lecture: The Diaspora Strikes Back”).