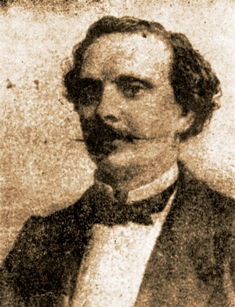 The Teatro del Ateneo Puertorriqueño [Theater of the Puerto Rico Athenaeum], with the National Archive for Theater and Cinema and the Conservatory of Dramatic Arts, has dedicated a cycle of programs to the founder of the Ateneo Puertorriqueño, writer Alejandro Tapia y Rivera (often referred to as the Father of Puerto Rican Literature), who established it in 1876. The 32nd Festival of the Athenaeum Theater: TODO TAPIA, in memory of the life and works of Tapia y Rivera, runs from November 2008 to September 2009.

As part of the activities, the Ateneo´s theater company is staging one of the writer´s masterpieces, “La cuarterona” [The Quarteroon]. “La cuarterona,” the ill-fated love story between Julia, a young light-skinned mulatta, and her white lover, Count Carlos, was written while the abolition of slavery was still in under way. Published in Spain in 1867, it was censured for many years in Puerto Rico for its critique of bourgeois landowning society who had made its fortune with the sweat of the slaves and for its abolitionist perspective.  In the vein of other nineteenth century texts with anti-slavery standpoints such as Cecilia Valdés (Cuba, 1839), Uncle Tom´s Cabin (United States, 1852), and Isaura, the Slave-girl (Brazil, 1875), this play explores racial segregation, class conflicts, and their political context.

This theatrical production is adapted and directed by Roberto Ramos-Perea (educator, playwright, actor, director, and theater critic), who has restored the work to its original form by reincorporating the bolder, more revolutionary portions of the text that had been censored by Spanish government and by Tapia y Rivera, and which do not appear in the versions in print today.  This piece offers an insightful analysis of the complex intersections of race, gender, and class within the colonial framework, making it compatible and current for on-going discussions on colonial and postcolonial relations today.

There will be nine performances of “La cuarterona” held in the Teatro del Ateneo in Old San Juan from March 13 until March 29, Fridays and Saturdays at 8:30 PM and Sundays at 4:00 PM.

For more on the theater, productions, and cinema archives, visit http://www.archivonacionaldeteatroycineap.com/