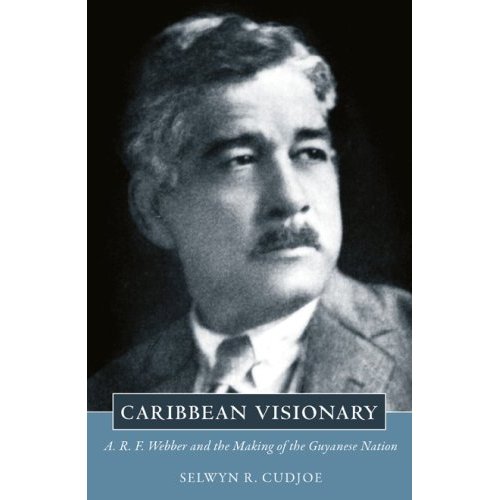 Selwyn R. Cudjoe (author of Beyond Boundaries: The Intellectual Tradition of Trinidad and Tobago in the 19th Century, C.L.R. James: His Intellectual Legacies, V.S. Naipaul: A Materialist Reading, Resistance and Caribbean Literature, among others) brings us yet another important contribution to Caribbean studies and intellectual history.

Caribbean Visionary: A. R. F. Webber and the Making of the Guyanese Nation (University Press of Mississipi, 2009) is a critical biography of A. R. F. Webber. Born on the island of Tobago, on January 1, 1880, Albert Raymond Forbes Webber became a leading figure in Guyanese history and Caribbean politics.  A distinguished Caribbean scholar, statesman, legislator, and novelist, he struggled for justice and equality against British colonialism. In this thorough and insightful biography, Selwyn R. Cudjoe analyzes Webber’s writings and examines his social and political activities (such as his many travels across the Atlantic, his formation of the West Indian Press Association, his work on British Guiana’s constitution, and his involvement with the British Guiana Labour Union) to provide the reader with a textured and comprehensive portrait of how one man’s crusading journalism, legislative prowess, and ideas on economic transformation made him an agent of change for the Guyanese people and for the future of the Guyanese nation.